Irrigation Systems for Your Yard: What You Need to Know

Irrigation Systems for Your Yard: What You Need to Know 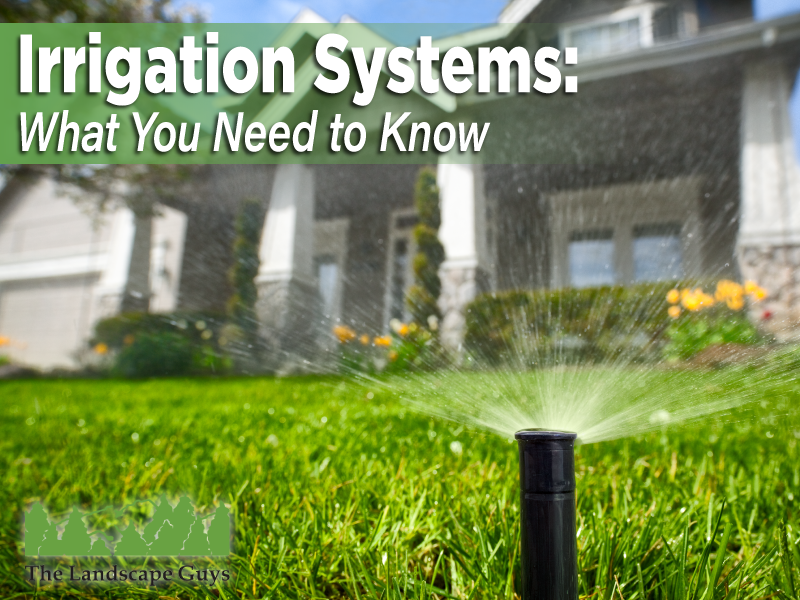 From early spring to the end of fall, your yard and garden are only as good as the amount of water you give them. And down here in the South, where the sun shines bright and hot, that’s going to be a lot of water. So why not consider installing an irrigation system on your lawn? Too afraid the system will be complicated and overpriced? Don’t worry, The Landscape Guys have everything you need to know about irrigation systems—how they work, how they can make your grass greener, and your life much easier.

When considering incorporating an irrigation system into your lawn, it’s easy to quickly dismiss it because you can simply walk around with a hose and water without having to pay for someone to come dig up your lawn and install some permanent sprinklers. Depending on the size of your lawn, this might be true. However, for those of us with more yard than we would like to drag a hose across, maybe it’s worth looking into. After a second thought, not having to manually water your lawn has quite the draw, and it’s not only the ease of watering that comes as beneficial with irrigation systems. The manner in which your lawn is watered makes a difference as well.

The truth is, irrigation systems are incredibly efficient. Imagine the amount of time you can save by not having to water by hose (watch out for those kinks in the line!). Irrigation gives an even, consistent spread of water. You can even tweak individual sprinklers within the irrigation system so that they give more or less water, which is perfect for those areas where the grass might be a little too soft or a bit too brittle.

Before deciding whether or not irrigating the lawn is your best option, let’s look into how these systems work…

Irrigation—How it Works
Irrigation systems are composed of four main components, all intricately connected like an underground spider web. It’s a little complex at first, but once you see how it all fits together, how all the parts of the system work together, you will see just how wonderfully residential irrigation systems work.

Here is a breakdown of the four main parts:

The Controller. This is a large box that acts as the hub and is buried beneath the ground. Inside this box are a number of valves, all of them leading to different areas of your yard. Once the water (coming from the main water source) reaches the box, it is distributed into each of the valves and out into each of the watering zones for a nice, even spread.

Valve System. Each pipe has a valve system that can be managed with electrical pulses coming from a timer. The timer signals to each valve, telling it to open or close. If your system were to ever spring a leak in one of the pipes, you would need to communicate to the valve system which pipe(s) needs to be shut down so it can be fixed. Then call The Landscape Guys for a quick repair!

Underground Piping. Whether your irrigation system’s piping comes in polyurethane or PVC piping, both are known for enduring extreme environments and rarely burst or crack once placed underground. Once your watering zones have been configured, the pipes are placed and fastened in such a way so that the water flow, when turned on, will provide a constant, even stream to all the areas needing water. And with the use of the valve system, any of these pipes can easily be shut off in case there are areas already soaked.

Sprinkler Heads. The most recognizable element of an irrigation system, the sprinkler heads are the little guys that pop out of the ground and shoot droplets of water across your lawn. There are all sorts of heads that you can use—rotor head, spray heads, bubblers…but it’s best to have a professional explain which head is appropriate for your lawn. One thing to keep in mind: it’s a good idea to use the same kind of sprinkler head throughout your yard since mixing and matching often leads to over and under watering.

The Pros and Cons of Having an Irrigation System
Deciding to get an irrigation system put in your yard is a big move, one with a high cost on the front-end, so it’s important to look at both sides of the coin before making your decision. Let’s start by looking at the cons to automated irrigation:

Creating Zones
Planning where you want your sprinkler heads popping up can be a lot of work. Since you want complete coverage of your lawn (and gardens if possible), the zone diagram needs to be planned perfectly because if it is not, and the lines are placed, you will not have even coverage. One easy, quick way to get out of this problem is to hire a professional team to come do it for you!

Installation
After planning your watering zones with a professional, it’s time to install and that means a messy yard. The only sections dug up will be where the pipes are going, but that brings up a lot of mud, which can cause an even bigger mess after a big rain. That said, if you can handle an unsettled yard for a short time there is a big payoff—you will never have to worry about watering your yard again.

Initial Cost
Irritation systems can cost thousands of dollars to install, and since they are seen as a luxury rather than a necessity (you can water the old fashioned way with a hose), the initial cost is the biggest deterrent. But—with things like payment plans and the understanding of the true pros to automated irrigation—the initial cost doesn’t have to stand in the way.

…Now, the pros:
Ease and Peace of Mind
Automated irrigation takes all the work involved with watering manually and reduces it to the flick of a switch. Not only is it that easy to decide when—and where—to water, you can also set times and days to create your own watering schedule. Whether you are at the beach or in the living room, your lawn will be completely hydrated.

Thorough Coverage
It’s important to know when to water your lawn, as well as, how often to water it. But it’s just as important to get consistent, equal coverage. You don’t want sections of your lawn, usually, those along the perimeter, missing out on the action, and a precisely-placed irrigation system will make sure that doesn’t happen.

Cost Efficient
The best part of having an irrigation system is that you control the water output—both when and how much. And you can get exact with how much you put out, so if it rains you can scale it back, if it’s dry you can bump it up. After a few years of perfectly watering your lawn and gardens, tally the amount of money you have saved from not having to feed and even replace large areas of grass due to that glaring summer sun. That irrigation system might just pay for itself sooner than expected.

Whether you already have an irrigation system or you are looking into getting one, give us a call or visit us online. We can repair leaks, check your zones, even help you plan new ones. Don’t get lost in the cost or set back with current irrigation issues. The Landscape Guys can take care of it all.